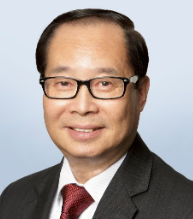 Pin Tai joined Cathay Bank in 1999 as General Manager of its New York region, and was instrumental in the development of its East Coast presence in New York, Boston, Maryland, New Jersey and Chicago. He took on more responsibilities within the bank as EVP of Eastern Regions including Texas, and was appointed Chief Lending Officer in 2013. In 2015, he was invited to join the Board of Directors and was appointed as President of Cathay Bank. In 2016, he was named CEO &amp; President of Cathay General Bancorp and Cathay Bank. During his tenure as CEO and President, Cathay Bank was ranked within top 20 Best Banks in America for 5 consecutive years by Forbes Magazine.

Mr. Tai has over 35 years of commercial banking experience in America, Hong Kong and China. Prior to joining Cathay Bank, he worked for Bank of China, USA in charge of credit and business development. Before that, he was with Bank of America in Hong Kong and China providing international banking services to Chinese state-owned banks and companies as well as multinational companies. He was amongst the earliest group of American bankers entering China market in 1980.

Mr. Tai graduated from the University of Rochester with B.S. degree and received his MBA degree with Honor from Northwestern University’s Kellogg School of Management. He was former Vice Chair and board member of NY Chinatown Partnership Local Development Corporation. He is currently a Director of Cathay General Bancorp, Cathay Bank and Cathay Bank Foundation, Western Bankers Association, Foothill Family Services at Pasadena and Worldwide Christian Church Ministries.